A Personal note from Jenny on our 4-year anniversary

Home / Uncategorized / A Personal note from Jenny on our 4-year anniversary
May 29, 2017
Uncategorized
0
1

As I was unpacking some old boxes back in March, getting all set up into our awesome new location, I un-boxed this vintage, sun-faded Interior Design book. I smiled from ear to ear. This book was a gift from my parents on my 13th birthday. It was a true ‘wow’ moment, stood exactly where I was 17 years later.  It’s incredible to think of the journey’s we take to get us to the point we’re at in life today. When you dissect it and piece it all together, it’s likely a mixed bag of emotional events that took more courage and strength to accomplish than we actually give ourselves credit for.

As a child I remember rearranging my bedroom furniture at least once a month and the roll of my mother’s eyes and the look of “not again”. Even then I needed to find a more efficient way of living in my space! I also have a very vivid memory from my childhood of sketching a design for a coffee table that had a fish tank built into the centre of it. The top of the tank was flush with the top of the coffee table so you could look down into it. Of course I kept up with some of the usual teenage hobbies, but how many thirteen year old girls are begging to redecorate their bedroom, hang wallpaper and shop for new bedding and drapery on weekends? This is where the book sparked the first flame.

Growing up influenced by European design and travelling to many European countries as a child, inspiration was all around me. What ‘usual’ teenager or young adult is fascinated by the finer details of interior stonework at old churches or the exterior moldings around doors and windows of centuries-old stone buildings we visited on family trips to Malta, France and Cyrpus? What 19 year old is eager to spend their weekends visiting 18th Century manor homes, which surrounded us in North West England, taking in the elaborate ceilings and staircases? This frequent stimulus was ultimately strengthening my passion for Interior Design, and it should have been an obvious career choice for me right out the gate, but for some reason, probably something to do with confidence and security, it wasn’t.

At around nineteen, a furniture restoration bug took hold of me and hours upon hours of flea market and antique store hunting also became my weekend hobby of choice. Followed by countless days of stripping, sanding and painting in the garage and selling piece by piece on EBay…for a wee profit! The entrepreneur side trying to escape!

Finally, at around age 20, after at least 3 years of confusion, in and out of jobs I couldn’t relate to, I took the leap to quit a well-paying, but utterly boring, administration job and return to school to pursue my true passion.

In 2008, I graduated from Wigan & Leigh College, in Lancashire, with distinction in Interior Design & Décor. However, like most fresh starts, the road to success had a rocky beginning. My graduation was not timed well with Britain’s 2008 economic recession and my first residential interior design job was cut short after just 6 months when the company fell on financial hardship. Commercial interior design roles were seemingly the only option out there, there was only one problem. I was only qualified for residential design and didn’t have any qualifications or experience in AutoCAD (Computer Aided Design), which was a major requirement in the commercial design world. So back to school I went! After another 6 months of education, a Manchester-based commercial interior design company took me under their wing and my mind was blown wide open with a whole other level of creativity, construction and building code knowledge.

In the summer of 2009, a group of friends invited me on a 5-week trip around the USA. Travel has been and always will be my major weakness! So with the boss’ approval, I said yes! Three weeks into our trip through San Diego, I met my now Canadian husband and the rest is history, so they say!

I moved to Canada in May 2010 and by July 2011 was fully immigrated as a permanent resident. Now that everything was official, the job hunt was on! Downtown Toronto based companies were seemingly the only place that could offer me a comparable position to what I’d left in Manchester, England. However, taking the advice of many people around me on the unpleasant commute to and from downtown Toronto, I realised this lifestyle wasn’t for me. In the meantime, while anxiously awaiting for my immigration papers to be approved, we purchased our first ‘project property’ in the west-end of Guelph and so for the next few months I was kept busy renovating our house and also a separate family ‘flip’ property on the east-end.

When it came time to sell the flip property, we hired a Home Staging company to help us showcase our vacant, move-in-ready house. Shortly after the sale of that property and witnessing the amazing results Home Staging achieved for us, a light bulb went off and on May 29th 2013 the registration papers for Centre Staged Inc. were submitted and the company was born!

I can gladly say that since 2010, my roots are now firmly set in Canadian soil. I have landed, in every possible way. Although in the very beginning, finding work here seemed like a major obstacle and a huge challenge to overcome, it was ultimately an un-loved detached house in Guelph that kept me motivated and was the starting point of Centre Staged Inc., which I will be eternally grateful for.

I’m incredibly proud of the multiple awards and community integration Centre Staged has achieved over the last 4 years. It all started with inspiration from a simple book and today, just 4 years since it’s opening, has grown to the scale of our thriving new office and warehouse location.

The many world cultures I’ve seen and the artifacts I’ve collected along the way, that sit around my home today, remind me on a daily basis, not only how blessed I am to have experienced the things I have, but also remind me how vast the world is and how uniquely we all live. They allow me to keep a broad perspective and an open-mind when designing and staging homes.

I believe that your home should be a fully functional space for you and your family’s day to day living habits. It should offer a helping hand in the form of a well-designed kitchen or a well-organized pantry or closet, in our daily chaotic lives, but ultimately should be our reward of comfort and luxury that brings a smile to our face and a sense of pride, just at the exact time we need it to.

I’ve found that by having the belief and confidence to nurture what you truly enjoy, growth and success just seem to follow. Passion, compassion, open-mindedness and most importantly, genuineness, are the foundation this company was built on and will always be at the forefront of what we do.

March 2017 renovations all done and moved in 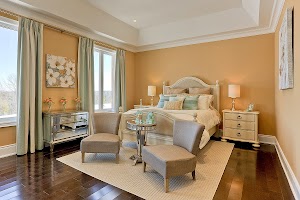 Nancy Myslik
18:48 27 Apr 18
Such a fantastic business. Jenny the owner is a true professional and an amazing designer. The homes she stages look phenomenal and her design jobs are gorgeous. Her staff of professionals are incredibly talented and really know their stuff. I had the pleasure of hanging my artwork in their beautiful office space as well. I highly recommend Centre Staged.

Josh Friesen
16:00 28 Apr 18
I recently booked a staging consult with Centre Staged for an upcoming listing I have and I was really happy with how it went. Kelsea did the consultation and the job she did was 10/10. The first thing I'll mention is that she did an awesome job handling questions from my Seller. Having the technical knowledge she does is so important, but her people skills are a perfect compliment to her expertise. Giving advice on how best to change the look of a home to make it the most appealing to buyers can be a sensitive topic and Kelsea handled it beautifully. The advice she gave for each room was detailed and very well thought out, and when she left, my seller had all the information she needed to maximize the potential in each room of her home. I will definitely be working with Centre Staged again. Very impressed!!

Julie Ashley
23:05 11 Apr 18
Jenny and her crew were a pleasure to work with. Jenny is professional and knows her craft. The home to be listed might have benefited from higher quality staging furnishings but I recognize that this is a niche market in Guelph and not often sought after, so it is realistic that it not be available.

Megan Flaherty
23:19 18 Apr 18
Centre staged did an amazing job staging our home, and the buyers scooped it up quickly. Thank you!

Melanie Bartlett
13:01 12 Oct 16
Jenny is designing our new office space and we couldn't be more thrilled with the process so far. It is evident that she understood our company's vibe and atmosphere judging by the work she has done for us so far. She is so friendly and easy to get a hold of! I highly recommend her services if you are in need of an interior designer or stager.
See All Reviews
Contact

Connect With Us
Signup for Our Newsletter
Privacy Policy | Sitemap
Website developed by Intrigue. Additional accessible formats for this information are available upon request. Contact Us for more information.
Copyright © Centre Staged. All Rights Reserved.

We’re currently not accepting any new staging furniture and decor rental bookings while we refresh our inventory and reorganize our warehouse. Thank you for your patience while we work to keep our stock fresh and updated for your projects.